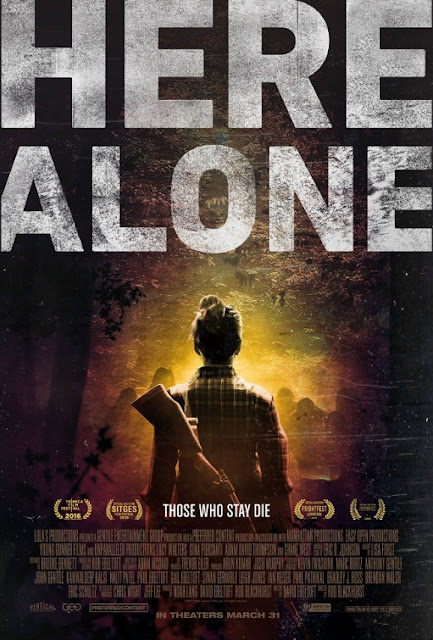 As with all of my reviews of films for The Creepercast, I fully recommend that you check each and every one of them out. I am one man and this is my opinion. I've seen plenty of movies that received reviews that were the complete opposite of how I saw the film. These writers, directors, producers and actors all put a lot of time and love into these projects. They deserve to be seen and appreciated for what they are. Everyone has a dream and I fully support the people that take the time to make theirs a reality. With that being said....

When zombie films began to gain popularity, another smaller genre emerged along side it. The plague/virus film. Far too often it's lumped in and looked at as a zombie film, but it's not. They may be mindless killers with many similarities to zombies, but they are not the undead. They can be killed, just like any other human being. It's easy to confuse the two, as the word zombie implies that it's a person acting on impulse without the use of logical thought. Pure instinct. However, a virus or plague can be cured and being dead, cannot. The most commonly mislabeled film in this genre is Danny Boyle's '28 Days Later'. A masterpiece in it's own right and the gold standard for what these films should be. There have been many imitators and even contenders who've created some pretty amazing stand alone films, but it's hard to top something that's near pitch perfect. Now, something that these films tend to shy away from is the slow boil method of storytelling. Many of them are very kinetic and fast moving, just like the infected that seek to kill the uninfected. The zombie genre has birthed many films that have little to no action in them, that rely more on character development, than raw kill counts. 'The Walking Dead' television series is a prime example. It's as much, or more, about the people that live in the post apocalypse, than the undead that inhabit the world along side them. Then, 'Here Alone' was made. A 2016 film directed by Rod Blackhurst and written by David Ebeltoft. They took the two concepts of fast paced virus films and merged it with the slow boil zombie film. The result proved to be one of the most interesting and well done films of this year, so far. I had no idea what was in for, when I started watching it last night, other than fellow Creepercast writer William S Mayfield's glowing review. This is not your grandmother's virus film. 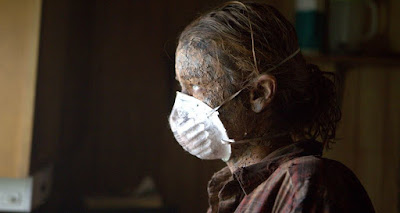 The story begins with a wide and nearly silent shot of a beautiful forest landscape. As we slowly ease our way into the shot, we meet Ann. She's a lone woman, who's clearly been on her own for a while. Living off of the land and just barely surviving. As the story progresses, we get glimpses into what happened up to this point. She was married, with a baby and on the move after an outbreak caused normal people to become violent killers. Her husband had taken them out into the forest where he had grown up, to find safety and a place to hide, until the world went back to normal. During the course of this time, she had somehow ended up being on her own. On one of her trips back from foraging for supplies, she comes across a man named Chris, who's been injured and his stepdaughter, Olivia. She hesitantly takes them in and helps Chris with his wounds and offers them food and shelter for a while. Before long, a friendship is forged, as Ann is no longer alone. But the longer they stay together, the more we realize that perhaps this wasn't meant to be. That's all you'll get from me, in terms of the plot. The rest is something that you have to see play out on your own.

'Here Alone' uses the plot device of telling the story behind the story, as the movie is continually moving forward. So at certain points within the tale, we get establishing scenes that tell us how Ann got to the place she ended up and what happened to her family. It's a brilliant way to have us learn about who she is, as we feel like we already know her, but there's more behind why she is the way she is and why she does the things the way she does. We never get that with Chris and Olivia, but their story is, instead, told through exposition. Rod Blackhurst has a fantastic way of handling this type of film, without relying on big set pieces, fancy make up effects and large crowds of the infected. Instead, we only get sound cues and the occasional view of the things that lurk in the shadows. In fact, we don't even see one of the creatures, until almost the third act of the film. Instead, we hear the terrifying screams of them in the wind and it's almost more frightening imagining what's out of sight, then the immediate jump scares of most of the films in this genre. He also makes good use of sound and the films score, to build tension and set the tone. David Ebeltoft's script, is intelligent and he creates believable characters that react in ways that any normal person would react, given the situations he puts them into. There's no superhuman acts of heroism or unbelievable marksmanship. Everyone is just as human as any of of us. Full of doubts, fear and the basic need to survive. The cast should also be noted, for their understated performances. Adam David Thomson (Chris), Gina Piersanti (Olivia) and Lucy Walters (Ann) are all perfectly cast in their roles. Each one of the embodying that person and breathing life into what was merely words on a page. The result of all of the cast and crews efforts, is a film that takes this subgenre into a different place than it's really gone before. You feel as though this is something that could happen and that these are people you know and could relate too. The story, itself, may not be entirely new or original, but that's really hard to do with such a specific genre. With that being said, you can't deny that they've created something unique. Even more so, considering that the entire film takes place in an enclosed area. No trips across country or even a move from one city to the next. This is all happening in the space of about a half a mile or less.

Obviously, I'm a fan of this film. It's such a simple story, that anyone could make it and all the elements could be there. What makes this different, is that everyone that was involved in making 'Here Alone', was hell bent on creating something more than just another virus film. They wanted to make something that stood out. In my opinion, they succeeded. This has already earned another one of the coveted spots on my 'Top 13 Horror Films of 2017'. As to where it lies on that list, remains to be seen. There is still quite a bit of time left in the year, for other films to come out and potentially move it down the list. I do know that it will be on there somewhere, as zombie films and virus films are my horror film sweet spot. I have an undying love for movies like this and anyone that knows me, knows that this is my bread and butter. I've seen so many different takes on this same story, that when I find one that makes it all feel new again, I tend to fall in love and fall hard. In this day and age, they've become almost passe with the general viewing public and so much a part of our collective pop culture subconscious, that people overlook them as nothing more that bubble gum viewing. What they don't always realize is that these are metaphors for so many aspects of our daily lives. Not unlike the children's stories that are passed down from one generation to another, these tales tell us about who we are. Not only as human beings, but as a society. It also doesn't hurt that there's a certain primal fear that comes from the idea that we are no longer the highest up on the food chain and that at any moment, we could be over come by a large enough number of these creatures. Either by becoming infected or by being devoured by them. It's a thought that, to be quite honest, freaks me out.... and I love every minute of it! This is a 4 out of 5 star entry into the ever growing library that is the virus/plague genre. A film that is not too be missed and one that anyone who is a fan, like me, needs to see. I promise you that you won't regret it.

If you enjoy this film, you should also check out: '28 Days Later', 'The Battery' and 'The Dead'

Email ThisBlogThis!Share to TwitterShare to FacebookShare to Pinterest
Labels: 4 out of 5 stars, Here Alone, joel., plague film, The Creepercast, Top 13 of 2017, virus film 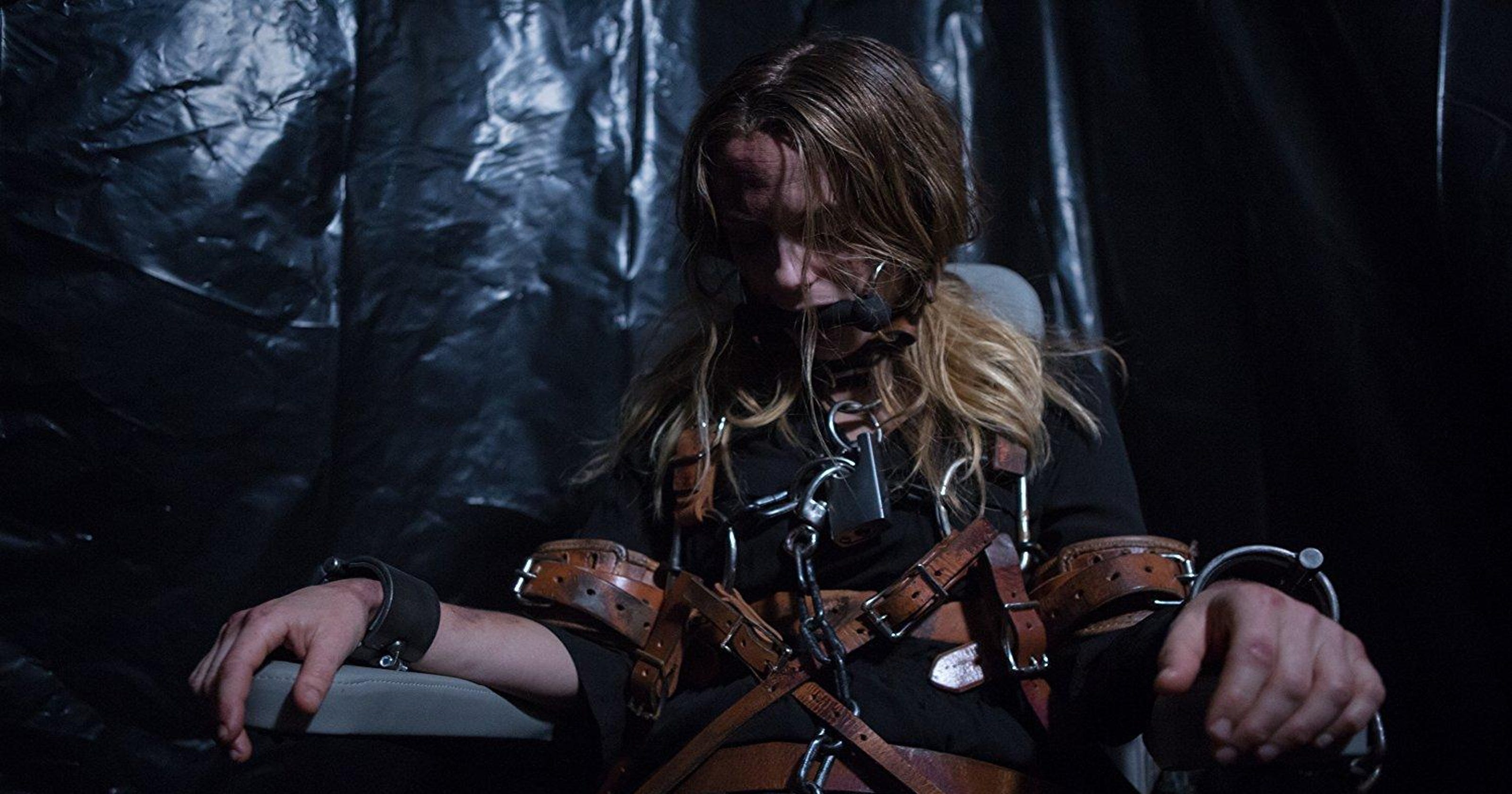